[I have been paralyzed by thoughts, ideas, anxieties, and fatigue lately. I have been pacing in circles not knowing how to move forward. I have stopped myself from complaining about the horrible rash that caused me to lose my beloved PICC line last week, the horrendous fingernails that can’t grip anything and have turned ziplocks into arch enemies, the sensitive toenails that make the weight of the bed sheets feel like the weight of the world, and the sore legs that feel like they’ve run a marathon when they haven’t done anything at all. I have felt narcissistic and pathetic so I haven’t wanted to share anything. THEN SOMETHING CHANGED. I started talking again about what was real and people stepped toward me instead of away. I shared an idea with a new friend and it was received with acceptance and enthusiasm. I shared my bald head with a hairstylist and she smiled with admiration. I answered the front door without a hat on and explained to a window salesman why I needed a month before the estimate visit and he asked if he could hug me. He explained that his family was hoping his aunt would pull through her bout with breast cancer. We hugged twice. Then a friend texted me and said there was something in the cooler on my porch. The note much sweeter than the blueberry muffins. There have been more encounters than I can recount now that have filled my heart and changed my attitude in the last 24 hrs and I hope all of those people know who they are. You have changed my dread into joy and my anxiety into butterflies. I am so damn grateful for this community I continue to build that I know I will never go back to being that bored housewife who didn’t know if she would ever do anything meaningful with her life beyond raising her babies, supporting her husband, and cuddling her dogs. My therapist told me last week that this is simply too life changing. I think I’m convinced.] March 1, 2016

I have a hard time when things don’t go the way they’re supposed to. It’s like I am looking at a map in my head and I have my route planned. No detours, please. No roadblocks. So when I’m thrown off track on a sunny day, I don’t know what to do. Adjustments are hard.

It started with a little itching around the edges of my PICC line bandage. This led to rubbing and then full-on scratching, then the edges of the bandage started lifting up, so I had to call MSTI to have the bandage changed early. DAMMIT. I had been scared of infections since November and I couldn’t let one get me this way.

Removing the bandage revealed a much larger rash than I ever suspected. The nurses gathered ’round to have a peek and offer up opinions for cleaning and rebandaging. The suspicion was that the disinfectant hadn’t fully dried before the bandage was placed leaving moisture inside that caused the rash. They changed the type of bandage as well in case I was allergic to the adhesive. I was skeptical since my PICC was placed 5 weeks prior and I had had no issues before now, but better safe than sorry.

In the end, it wouldn’t work and I would be back at MSTI within the week to have my beloved PICC line removed altogether. Everyone agreed that with only 1 infusion left, an IV would be fine. I was nervous because of my history with phlebitis but Sara promised me she could get a good IV line for me. She even showed me which vein she was going to use. I shed a few tears at the idea of deviating from my original plan, but I had come to know all of the nurses surrounding me and I trusted them wholeheartedly.

At the same time all of this was going on, I felt like I was letting myself go physically. I had vowed I wouldn’t do that no matter what! But even spinning had become too much. My legs couldn’t handle it. I was left with trying to conserve my energy just to take care of my family and our day-to-day needs. Again, I had to change my plans and I didn’t like it one bit.

It’s funny how everyone was encouragingly reminding me that this was going to be the last round, but to me in many ways it felt like the most daunting round of them all. I’ve found that when the light at the end of the tunnel is the brightest yet still out of reach it can be the hardest time of all. You feel depleted from the long journey but have to summon enough energy and courage to reach the finish line. When I ran the Famous Potatoes Half Marathon back in 2012 I definitely found this to be true. That last mile was the hardest both mentally and physically.

These little setbacks combined with my waning energy – altogether mental, physical, and emotional – led to a spiral. At times like this I find myself literally walking around the house in circles. It always takes me some time to realize that I am looking for a way to move forward and I can’t quite find one. It’s MADDENING.

I should know by now that the answer is CONNECTIONS.

All it took was telling the truth when someone asked me how I was. This got me out of my own head and into a conversation. One small connection after another and I made a complete turnaround. Again, just in time.

So I had to bust out some of my most beloved hashtags along with some newbies: 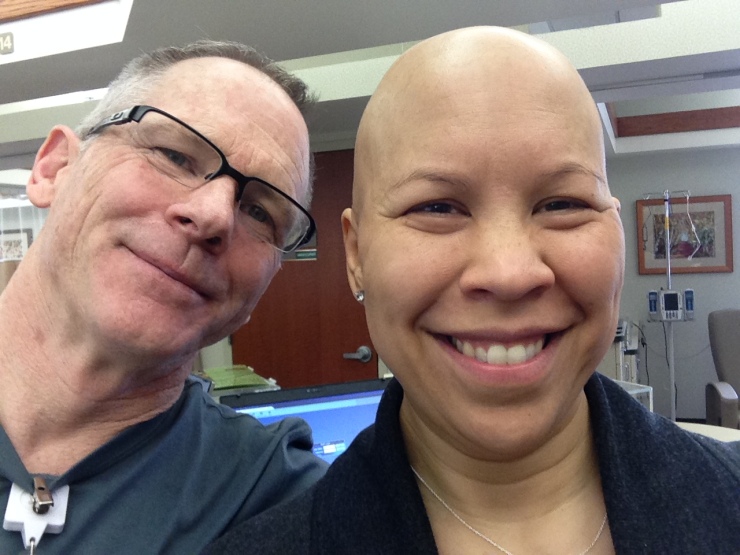 This is Jim. He helped me through the terrible PICC line rash. Great nurses are priceless. Heroes in my book.

One thought on “Wonderful > Perfect”